2010/08/31 - Delphi XE
The XE editions of Delphi, C++Builder, Delphi Prism and RAD Studio (which includes the aforementioned three plus RadPHP) have just been released.

2009/12/03 - Delphi and C++Builder 2009 Hotfix #2
This hotfix addresses issues with debugging on Windows 7, including: Assertion failure: "(!SetThreadContext failed")", running under the debugger on Windows 7 can cause the debugger to crash on shutdown, and No Wait Chain is shown on Windows 7.

2009/04/01 - Reasons to Migrate from Delphi 7 to Delphi 2009
This article gives a few good reasons to migrate, along with an overview of all the new features added to Delphi since version 7.

2009/01/20 - Midas Speed Fix
Andreas Hausladen has published a great MidasSpeedFix.pas unit that improves the performance of the Midas.dll and MidasLib unit for Delphi 6 to 2009. This is done by replacing the Midas memory manager with the Delphi memory manager (FastMM4).
Nick Hodges (CodeGear) responded with: "We are listening so well that this fix was just checked in and it should be shipped with the next update."

2008/12/20 - Help Update #1 for RAD Studio 2009
Help Update 1 for RAD Studio, Delphi and C++Builder 2009 is now available for download, with more details in the Release Notes.
Note that this help update only covers Delphi 2009 and C++Builder 2009 (and not Delphi Prism - all Delphi for .NET content has been removed), improving the help in several areas like coverage of the AnsiString and Character units, Generics.Collections, etc.

2008/12/05 - Delphi Unicode
In this Dr.Bob Examines article, I'll explain what Unicode is and demonstrate how Delphi 2009 supports Unicode, including a list with some useful Delphi 2009 Unicode tips.

2008/12/01-05: CodeRage III
CodeRage III, was a full week of online sessions on Delphi 2009, Delphi Prism and more. I have presented two session using Delphi 2009 as well as Delphi Prism. Replays are now available.

2008/09/29 - Delphi 2009 TTreeView nodes still ANSI
In this report, I'll describe a problem with the TTreeview being unable to load itself from Unicode files. The report is opened, but not reported as fixed, yet.
Note that I've also included a workaround, which consists of modifying the ComCtrls.pas unit in a few places.

2008/09/10 - Delphi 2009 Reviewers Guide
The Delphi 2009 Reviewers Guide describes the new and current features of Delphi 2009. There will be printed editions available as well later this year from Embarcadero to be distributed at local events.
For more in-depth information, you can also use my Delphi 2009 Development Essentials courseware manual which will be sent by e-mail on November 21st to all my customers (everyone who has ever hired me or bought something from me this century).
Current customers of Delphi 2009 in BeNeLux who ordered their copy of Delphi from me already have a preview edition. 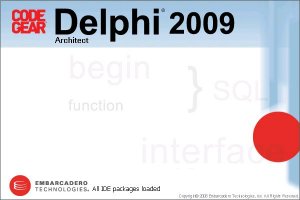 2008/08/25 - Delphi 2009 Announced
CodeGear just announced Delphi 2009 and C++Builder 2009, the next generation of the RAD tools for Windows. The products are not shipping yet, but the features and prices are announced, and if you're from the BeNeLux you can order your copy from my webshop.
Note that Delphi 2009 is a Win32 development environment only - for the .NET solution, we have to wait until later this year (for Delphi Prism)

If you want to read more about Delphi 2009 and C++Builder 2009 before you purchase a copy, then take a look at the sneak peek videos or following blog posts: