2012/01/01 - Delphi XE Courseware Manuals in PDF format
These following Delphi XE Courseware manuals are distributed in PDF format and include free updates (for a period of a year) and e-mail support about the topics covered in the manual. If you want to order more than one different title, please use the webshop at http://www.eBob42.com/Courseware..
Click on the price link for more info(table of contents, source code download) and "Buy Now" buttons:

2011/08/27 - Book Review: Delphi XE IntraWeb XI
In this video Alister Christie reviews the Delphi XE Intraweb XI book by Bob Swart. It appears he likes the book, and it has been worthwhile for him, although it is expensive. See the video for the full story.
The funny thing is that I didn't know that Alister has made the review until my son saw the movie on YouTube.

2011/01/20 - RAD Studio Quality Survey
Embarcadero cares a great deal about your experiences with our products. They are continually striving to make them better based on user feedback.
Director of Quality Assurance, Chris Pattinson invites us to complete the Embarcadero 2011 RAD Studio Quality Survey. This 23 question survey is for all users of C++Builder XE, Delphi XE and RAD Studio XE, and will take approximately 15 minutes to complete. Your contact details are optional, and will only be used if you agree for us to contact you with any follow-up questions. Thank you for your participation!

2010/10/19 - Delphi XE Development Essentials published
I've just finished my Delphi XE Development Essentials courseware manual; it's available for 42 EURO as paperback from Lulu.com (this price does not include shipping).
Delphi XE Development Essentials contains almost 300 pages (7 chapters) on the latest version of Delphi. Covering the IDE (44 pages), Language Enhancements since Delphi 7 (35 pages), RTL and VCL Enhancements (48 pages), Unicode and globalization/localization (32 pages), Modeling Support including metrics, audits and documentation (40 pages), Unit Testing (38 pages) and the bundled third-party controls, with special focus on CodeSite Express, AQtime Standard and the Subversion integration into the IDE (32 pages). Each chapter ends with a number of exercises, and at the back of the book there is an appendix with the answers (22 pages), so the book is ideal for self-study or use as training manual.
A PDF version of this book is given as free bonus if you purchase another PDF courseware manual from me or if you purchase Delphi XE or RAD Studio XE from me.

2010/09/29 - Advantage Database Server Components in Delphi XE
In this article, I'll demonstrate how we can recompile and install the ADS TDataSet component packages for Delphi and RAD Studio XE.

2010/09/02 - Delphi XE
In this article, I'll describe my first look and experiences with Delphi XE and RAD Studio XE based on the preparations for the RAD Studio XE launch in The Netherlands (and my Dutch Delphi OplossingsCourant). 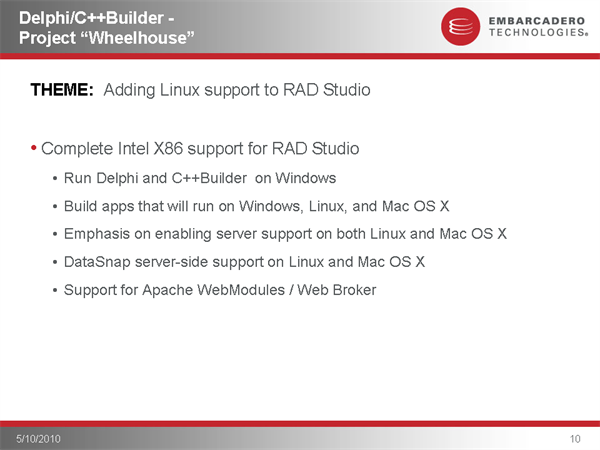 Note that the original Project X now seems to be split in two, and we will first get a release of Delphi Fulcrum for Windows and Mac OS X application development.

2010/02/22 - Michael Rozlog interview
Jim McKeeth from Delphi.org has conducted a podcast with Micheal Rozlog, the Delphi product manager. Among other things, Michael talks about the next version of Delphi, which support Windows and Mac OS X targets. There will be a preview for Linux target. Right now, this upcoming version is in beta at select third party developers.

2009/05/18 - Delphi "X" Main Themes
Delphi X is the codename for an upcoming version of Delphi with the following main themes: